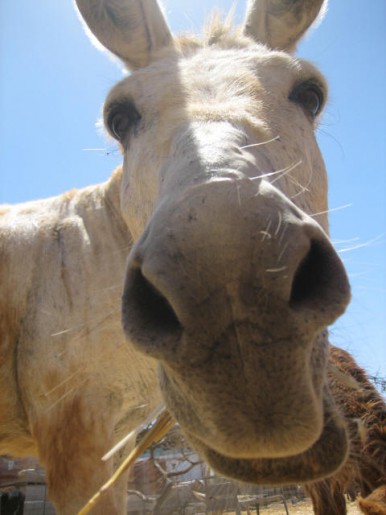 Once upon a time ago, a tremendous fool was born. Time passed, a bit more than a quarter of a century of it, and the fool remained foolish (a reliable tendency among his species). Then, by the greatest stroke of dumb luck, on a moonlight hillside overlooking the great blue Pacific Ocean, he experienced what zennists term satori — a great awakening, a robust insight into the absolute nature of reality.

He was allowed to see the whole enchilada. Every veil was removed, his past and future were seen in naked totality, every imaginable question —  millions of them! — was simultaneously asked and instantly answered. He was bathed in light, love, and absolute, penetrating understanding, and he knew then that the thing spoken of as enlightenment, realization of the Self, was real and attainable.

This sublime state passed, alas, and he returned to being just another ordinary dumbass. This fool was me. Is me. While I would like to tell you that my life transformed immediately and irrevocably on that night and that I went forward illuminated and in a state of perpetual grace, it weren’t to be.

In fact, in a matter of months, I rode a mountain bike into an immovable object at great speed, broke my neck in two places, and suffered a traumatic brain injury; used my newly-addled noggin to banish a near-perfect fiancee from my life; married a dangerous lunatic on the shortest of notice; jumped from the frying pan into the fire by conceiving a child with her on the morning of our wedding day; and descended into decades of on-and-off befuddlement, woe, substance idiocy, barking insanity, and quite often precious little else. Most of this resembled enlightenment hardly ever.

I say “alas”, but I don’t especially mean it. The path of the fool on the way to enlightenment and realization is as honorable as any, and more hilarious than most — who wants to be Trump, Ghadafi, or Theodore Bundy on such a lengthy and involved journey?! It does, however, require having the largest kind of sense of humor about oneself. One must accept and embrace oneself as a Spiritual Donkey, if you will — a beginner, a tripper and a stumbler, a hapless knucklehead trying helplessly to home in on the greatest prize of all. If you’re inclined to do that, too, welcome.

This is prolly a good time to say I’m making use of the ol’ donkey trope here, not disrespecting actual donkeys, who are cooler than the other side of the pillow in every way — why, just read about the donkeys of Fez who sometimes navigate that labyrinthine city alone on their daily rounds.

I look up to donkeys, and I aim not to be anyone’s teacher but my own. I don’t seek that altogether questionable relationship for you or me. Rumi said that trying to be a spiritual teacher is akin to trying to ride a lightning bolt up a river canyon, which sounds messy and dangerous. That would be a tragic detour for us both, so let us just simply trip and stumble, donkeys that we are, in one another’s company a while.

I’m taking this moment to be explicit about this because the nature of what I do can be misleading. Publish enough pretty books of spiritual teachings, pin a bunch of them on an internet wall, and people could be forgiven for thinking either that you’re some sort of enlightened prince, or (more likely) that you think that you are. Neither is true.

It is said that Alan Ginsberg once remarked to his friend and fellow seeker Gary Snyder, regarding their mutual devotion to spiritual pursuits, “We are fools, Gary!” — to which Snyder is said to have replied, “We may be fools, Alan, but we are God’s fools.” That is the most laudatory thought I think or say about myself: I am a fool, but I’m trying, at least, to be one of God’s fools.

I like this way of thinking about spiritual life, not least because it lends a soupçon of dignity to a process involving rather a lot of advanced if unintended buffoonery. Insight flashes, the inspiration to pursue what has been revealed is ignited, but then a lot of hard work, slogging, frustration, clown-ass failure, and tearing of hair pretty much inevitably follow. If you’ve heard a different version of an enlightenment story, you’ve been sold a line of shit, and should act to secure your wallet or purse.

This website aims, then, to be an aid to and a conversation about tripping and stumbling one’s way to enlightenment. There is, in fact, likely no other way there. We may as well acknowledge that regularly, with plenty of humility.

My own life has been colorful, wonderful, painful. I don’t carry on much about it here from day to day because I think it’s a distraction from what you likely came for, which is perhaps a quick breath of inspiration on your own journey. Those curious about just how foolish I’ve been, just how awful it’s been, just how wonderful, can click their way through the emoji garden: 💙 🍀🔪 😱  🦋  🍆. The answer to each is “very”. Onward!